Some of you might not have had Saarbrücken on their radar when it comes to electronic music – well, it’s time to change that. Located on the border to France, Saarbrücken has its own particular charm and charisma.
Despite coming from different cities, the founders of Trafo laid the foundation stone for the label in Saarbrücken. Formed to unite the existing potential, the two groups Arndt 29, Giorgi&Pom and Thomas Ritter merged in 2017.
In the field of electronic music, Saarbrücken has predominantly concentrated on techno, while the boys have devoted themselves to subtle, minimal music. In order to give their sound and creative output an appropriate home, all they needed was a place to experience and thrive.
At Römerkastell they were able to establish the label’s sound where the group also acted as organisers with international bookings such as Thomas Melchior, Archie Hamilton, East End Dubs, Martin Buttrich, Nick Beringer or the Mannheim BE9 artists Sedee and HoDoRi (Fabe & Ben Balance). 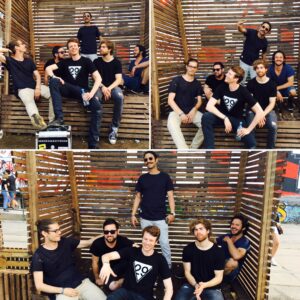 While being surrounded and charged by the old factory flair of Römerkastell the playground also provided an opportunity to build a studio where the collective eventually grasped the idea for the label Trafo. The concept of the label is to strengthen the ever growing network around their group by bringing people together who eventually become friends over time. On the first vinyl release Giorgi&Pom made their debut inviting Mannheim’s Fabe to round off the EP with a fine remix.

After such a great start last year has marked the label’s biggest success so far. Music lovers will remember when the track “Out of Sight” was played by Guilano Lomonte at Sunwaves Festival in Mamaia 2018 which led to a sold out record on the release day. Although the artist prefers to remain unknown, the intended direction of the label is already discernible – to offer itself and fellow artists a space to jointly grow and focus on music.

With that being said the group relocated to different cities around Germany after all. The new input they gained from finding homes in Berlin, Mannheim and Leipzig quickly manifested in their fresh of the plant release TRAFO003.

The third release is produced by Mbius, a young and very promising producer from Leipzig. Along the meandering route through a dreamy melody, Monade blends tiny, sweet notes with a harmonic groove, and immediately sets the tone to the EP where rhythm, drums and quirky tones serve as a tangible texture, inviting the crowd to the dancefloor. By adding his own prolific sound shapes, David Nicolas dishes out a hefty dose of energy to the piece, filled with carefully selected details and a ludic, intense rhythm – just like we know from him. The melody and drums are synchronized in a dance of equal and opposing sequences which sweetly delights the ears.

Rumgenigge doesn’t seem like a regular B1 as the uplifting melody races on a peculiarly beat where the listeners finds himself slipped into a world of dotty soundscapes. In comparison to the other tracks 717 got a more present baseline intertwined into a steady pulse, offering a perpetual journey through abrupt coming and going elements.

Whatever the future holds, the boys keep on focusing on what is most important for them, namely music. 2020 has been a bumpy year to all of us, nevertheless the group is quite optimistic about what’s coming next and is going to use the freshly crafted skills in isolation to make more music. Till then, enjoy the music!