Their friendship has lasted since their school days, allowing them to experience every step of their years of gastronomic development together. In the process, they have influenced each other, giving rise to new undertakings. As a worldly and warm personality, Oli has already established a wide social network within the gastronomic scene, while Fabian is characterized by his calm, analytical nature and penchant for numbers. The combination of their differences and qualifications leads projects around gastronomy, events, and marketing to success through unerring planning.

In 2014, Klub Liebe Studio started with guerrilla events in various public parks in Frankfurt am Main. This was followed by a temporary guest performance at Neglected Grassland and initiated the planning of numerous events in a variety of settings: Restaurants, off-locations, or clubs. To this day, the crew continues to change locations in order to provide the audience with constantly changing impressions. However, what has never changed is the extraordinary atmosphere of all the events – wherever they take place. Cooperations with different creative minds characterize them, shaping and expanding their vision of the events even further.

An enforced break triggered by the Corona crisis allowed them to take a creative break during which they could finally forge their diverse ideas into concrete plans. Klub Liebe Studio is now moving on to new shores. We wanted to find out more about those creative heads so we sat down with Oli and did exactly this.

Hey Oli! Tell us more. What exactly is Klub Liebe Studio?
Klub Liebe Studio is an ongoing project that we started in 2014 and at that time named „Mit Liebe“. At first, we started with small underground events/guerrilla open airs in parks. When it became too hot, we had to make it more official and started dealing with registrations, writing invoices, contracts with locations/artists, etc. Nevertheless, it was and still is a great feeling to plan an event and thereby make friends who simply aim for the same energy. Over time, the events became more and more professional – you simply know what you need in order to throw a good party. Especially in the Frankfurt and Offenbach area, we have friends who play different sounds that we and our guests are really craving for.
Throughout this time, we have gradually developed to the point that we have not only organized our own parties, but also organized an increasing number of events for companies, which then no longer only involved music, but also cocktails in the form of interactive cocktail training. With the background from gastronomy, various corporations were formed, which still exist today.
It has always been important to us to work with different elements contributing to a successful event: The sound, the artwork, meaning the way it is presented, and the design of the space. We always had to deal with different artists who have led their contributions to the event and thus completed the event holistically.

And who stands behind the project?
Over the years, the crew has changed at one point. When we launched the project, I was on the team with Marco Ambrosius and Marco Bruno. Due to some personal goals, they left the collective so I was running the whole event thing by myself for a couple of years.
Since 2019, my partner Fabian Bierwolf is at my side and we then founded a GbR (partnership under civil law) and set up an office, which is now where all the work is done.

Tell us a little bit more about you and your passion. When did you start realizing that you want to work in the nightlife industry and work creatively?
I started at a young age, while still going to school, working in different nightclubs, some of the Frankfurters may know the former Sansibar and the classic Hip Hop Club Cooky’s. But my passion started while studying Business Administration and doing my apprenticeship in a consultancy for IT and Telecommunication. I wanted to be in a business, where I can give people a good time, in a cool space, with nice drinks and sexy music, and foremost people with the same mindset.

Before I quit my trainee job at the consultancy, I founded with my friends as before mentioned, MIT LIEBE. This was the start of building up a platform for artists for sound, light, and art. Finally, I also wrote my Bachelor’s Thesis about Event Marketing and Communication.
It’s a great way to be satisfied by creating something, that is also liked by others. This includes cross-communication bringing different people together – and they result in a kind of community of creativity. So that is what happening very soon again and what we try to transport through our agency for clients, in sectors that we love: gastronomy, events, and marketing. 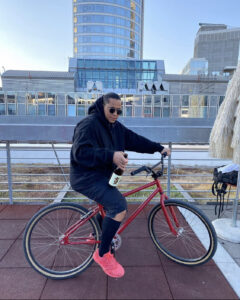 So what are your next projects?
On a weekly basis, we do a stream with artists from Frankfurt, just to keep in touch and to give them the opportunity to play somewhere else. We are also aware that there are thousands of streams happening at the moment, but we also do it for ourselves, just to listen to friends and acquaintances playing again.
Furthermore, we have founded an art initiative („Kunstinitiative 187 Nord„) for the Offenbach Nordend plan exhibitions in our new location, simply to provide a platform for this. Since we had a lot to do with art in the past, we do not want to miss that now either.
And one of our favorite projects is designing streetwear under our label „KLS Clothing“ with the help of old friends (Simon Rossow and Gabriel Stunz) who have already supported us with our event artwork or helped us to realize the design of the space. This way we have specially created pieces that will be dropped this summer. Such projects help us to stay creative and to remain in touch with our friends. 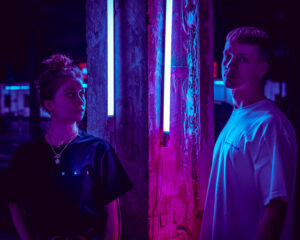 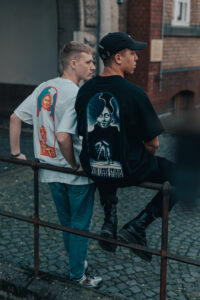 Kunstinitiative 187 Nord sounds very promising. What kind of art do you display?
We are very open when we talk about art because above all – we love it and we highly respect different types of work. Often there things that you might not understand at first but grasp the idea of it later on.
As you know, you need pros in the game so we asked a friend Joschua Yesni Arnaut, who is studying at the HfG Offenbach to curate our upcoming projects. He was directly into it – so we started right away. We have a location and we want to give this space to artists to represent themselves – that is and will be the plan for our upcoming project „Grace“. Due to the current situation, it was important to start an exhibition, which you don’t enter somewhere. 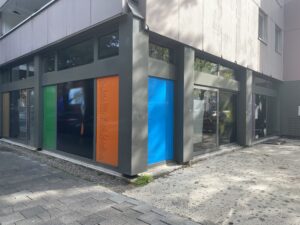 He had a good idea to bring three artists Annika Grabold, Asli Özdemir and Tatiana Vdovenko in. They are studying at HfG Offenbach as well and manage to realize an exhibition which is displayed on the streets. This makes the art accessible for everyone who is walking by.
The art produced for this exhibition by the artist is very different. Asli Özdemir is displaying art in form of using lyrics. Tatiana Vdovenko is using projection as artwork and Annika Grabold is working with light castes as an installation. Their works make the whole exhibition complete: which is called: „Warte ich muss das teilen“. We highly recommend keeping an eye on these three artists, because they very diverse in their works. It’s beautiful to read and to see the different colors, especially when it’s getting dark. Their art is getting illuminated behind the windowpane.
To finance such art and to get in touch with the culture department of Offenbach, we started the Kunstinitiative 187 Nord. Something to the name: Our Studio/Office and our future project Grace are located in the Ludwigstraße 187 in the district Nordend of Offenbach.

This sounds super nice indeed. Well, and how do you deal with COVID19 at the moment?
Well, plenty of contacts, but only via phone or Zoom. Most of the time there are only two of us in our office. If someone comes by, then of course we put on the mask. We take the act around Corona very seriously, because we are eager to get back to normality as soon as possible – with hugs, with kisses, with sweaty bodies in clubs. We try to do whatever is possible and otherwise renounce everything else, unfortunately. All the more we look forward to a better time and escalating together.

Do you have a permanent location?
We had our events take place in different places. This way we have a residency at Freud Club and for open-air, we were at Kochclub/Hassia Fabrik.
Since this year we also have a permanent location, which is called Klub Liebe Studio (Ludwigstraße 187, 63067 Offenbach) – besides work we play one or the other occasional set here. After Corona (hopefully soon) another location enters the game, aiming for coffee specialties, self-created cocktails, a lot of art, and of course sound. You can be very excited about it, but unfortunately, we can not reveal more 😉

Last but not least. What do you love most about Frankfurt/Offenbach?
Fabian and I were born and raised in Frankfurt, it is and will forever stay our hometown and turf. We love the multicultural and international vibe. Frankfurt is pretty small, which makes this city very familiar. Since I dropped from High School, 12 years now, wow… I live in Offenbach, which became my home as well. Fabian is still in Frankfurt BUT WE WORK IN OFFENBACH. Like Frankfurt, this city is open for everybody, not only because of its diversity and many nationalities but because the city is willing to get this region to the next level, especially for creatives. We want to be a part of this nice and sweet development and put all our effort to accomplish this mission.

Thank you so much for this interview! We are already looking forward to all your upcoming projects! 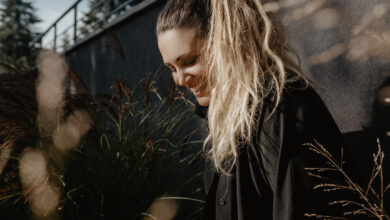 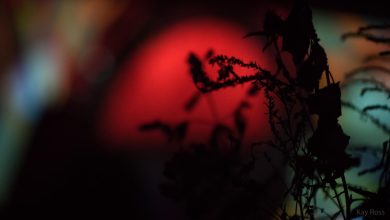 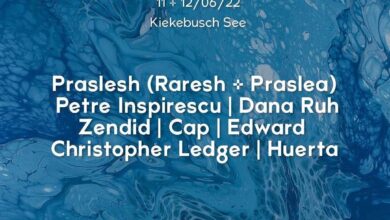