Clovis Bouhier. Some call him a citizen of the world; a vagabond immersed in the worlds of music and photography. The confluence of French, Japanese, and American culture, as well as his love of music and travel, have made him a uniquely suited candidate for the artistic DJ-lifestyle. Being guided by an unrelenting passion for music and photography his insatiable desire to follow the unexplored sounds has taken him to faraway places. Bucharest has become his home of choice since the pandemic started. However, it was 2017 when he first and finally moved to Berlin after going back and forth between the two cities. In Berlin, he was able to enjoy the dynamic and vibrant scene alongside friends and peers, most of which revolves around Club Der Visionaere, his musical home in the city.
Speaking of which, over the past few years, Clovis has amassed an impressive collection of photographs that beautifully convey the atmosphere of this magical place on the canal.

Soothing, warm yet luminous colors and magnificent details are defining elements of his imagery, which are also representative of his attention to detail and structures in harmony with the club. In a delightful way, he manages to capture the peculiarity of this place through his lens – a safe and intimate space where music and human connections are put first. A place where it is possible to leave everyday life behind and escape, where strangers become friends and everyone feels accepted as well as respected. Clovis takes us on a little journey – let’s be along for the ride. 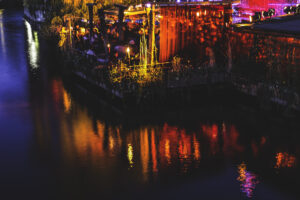 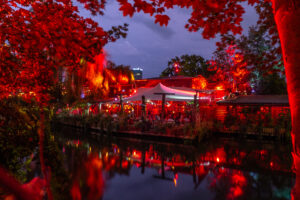 Dear Clovis, so tell us a little bit more. When did the passion for photography start?
For most of us, the photographic eye must start from cinematography we see in movies, but when I was a teenager in France, I bought my first camera to take photos of airplanes, that were a childhood passion. I did that along with photography classes through high school till my early 20s and then spent a few years without a camera when I was first getting heavily into music and DJing. I would sometimes use friends‘ cameras and fell in love with the pocket-size Panasonic Lumix with a Leica lens on the front. A photographer friend had told me it was the best lens on any consumer-grade cameras at the time. It turned out that a friend had a relative working for Panasonic and she gifted me my own model one Christmas in 2012, and from then on I got back into taking photos, particularly alongside all my DJ travel.

So does your camera usually come alongside a DJ gig?
It has traveled with me all over the world! I always try to have a few days extra before or after a gig in a new city or country to take photos and explore the local culture. 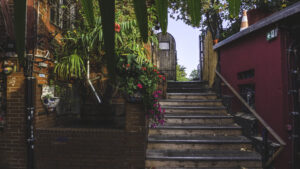 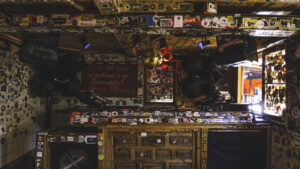 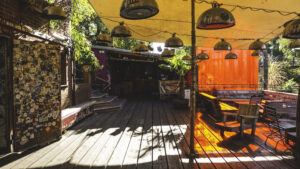 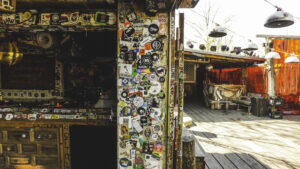 What camera do you use?
A film Canon AE-1, a Panasonic Lumix LX-5 since 2012, and more recently in 2019 I got the newer Lumix LX-10 which is greatly improved. The nice thing about those Lumix cameras is that they are very small and pocket-sized and unobtrusive, but have high-quality fast lenses. Particularly at CDV, photography is actually not allowed and I don’t like to broadcast the fact that I am taking photos. I try to keep it discreet, and usually don’t take photos of people there, the point of no photography rules is to let people relax and not feel like they might be recorded or end up online. 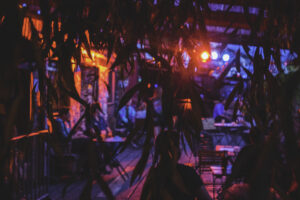 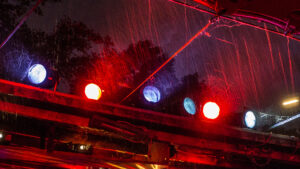 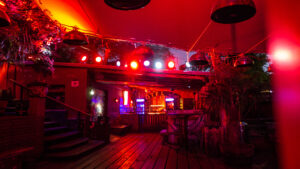 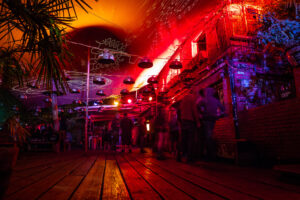 Do you remember your first visit to CDV? Take us on a little journey, please 🙂
Of course. It was my first year visiting Berlin in the fall of 2012, I had gone to see my friend Roustam play at Renate one night and we decided to hop over to CDV in the morning. It was very cold and almost winter weather, and this was when they had transformed CDV into a winter venue for one season, it looked more like a strange wooden cabin than the summer open-air place I had always imagined and seen in photos and videos. It was wild and packed inside with Binh playing back to back with Raresh. I couldn’t hear the music very well and was mostly talking to friends and exploring, but at some point, I squeezed into the small dance floor and the corner by the little entrance to the booth, and the charm and uniqueness of this tiny club instantly made sense. I had never experienced anything like it. 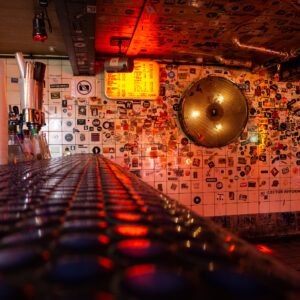 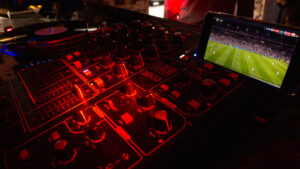 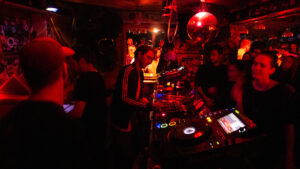 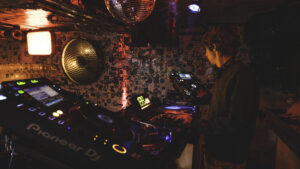 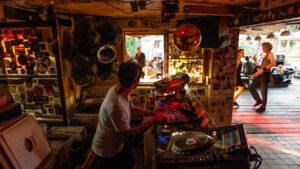 Binh and Raresh back to back – that’s quite something. How about your first gig there? Do you have a most memorable night?
The first gig was as special as it could probably get. Summer of 2013 I was trying all season to figure out how to get a slot. My first booking was rained out and didn’t happen. Finally, I saw Jan Krueger had one of his nights coming up in early September with a small lineup, we had been friends for a few years since he had played in Los Angeles, and he was happy to add me. It was a Saturday, the afternoon after a Get Perlonized, and one of those beautiful sort of last really warm days of summer. I started at noon and slowly it began to fill with people coming from Perlon, which I’ve realized since then is always one of the best crowds you can have at CDV. When Andrea Cichecki arrived to play next we decided to play together. We had never actually met before but had a feeling it would work and it was so much fun. We ended up playing the next morning after Jan & Daze Maxim till the following noon…until the DJs arrived for the next party on Sunday. As far as most memorable nights, there are so many. But a favorite moment was one random summer weekday, sitting at home around noon and finding out Fumiya Tanaka had just started to open a party for the afternoon. I speed walked over to CDV and enjoyed him playing for very few people, super relaxed, with lovely house and perfect daytime afternoon music on a beautiful day. 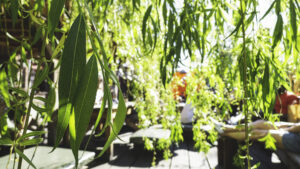 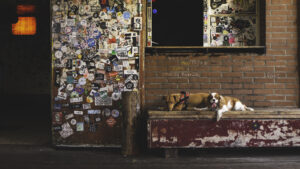 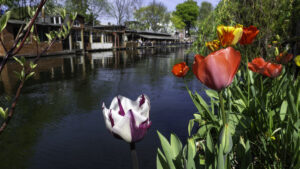 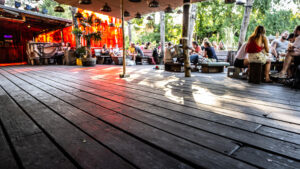 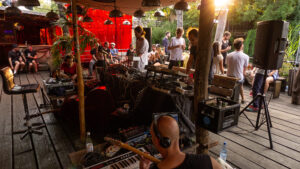 Uff… this took me right back to better times. Thank you for this. So and when were those pictures taken?
Most of the photos I submitted here are from the last 3-4 years only, as it was already plenty. I have more from past years in my archives, and I’ve provided most of them to the club to use for promotional purposes. 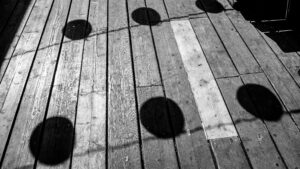 As far as we know, you are a self-taught photographer. Is that true? Would you recommend this to someone that is beginning to learn photography? Do you think this has given you more freedom in terms of creativity?
I took photography classes in high school but only for analog black & white and darkroom work. All else is self-taught. I don’t find photography to be particularly difficult technically. As far as all cameras go, there are only a few basic parameters you need to understand for exposure and what to use when. What matters most after that is composing frames and visualizing scenes to capture before they happen so you can be ready for them. As a DJ during the pandemic period, photography has been an invaluable outlet over the last months, and I’ve continuously rediscovered my love for it. You can do it anywhere at any time, and having this other creative outlet has helped me survive this time.

Are your photographs up for sale? If yes, where can we find them?
I’ve only recently started to put prints up for sale, I’m working on setting up a new shop at photoshelter with a website. Some of the photos you see can be ordered on here: https://fineartamerica.com/profiles/clovis-bouhier. Also for now, the work in progress is at clovis.photoshelter.com 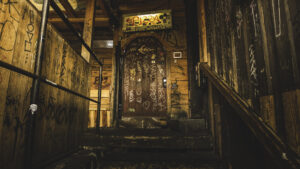 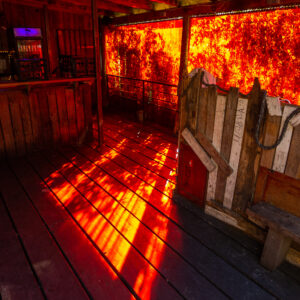 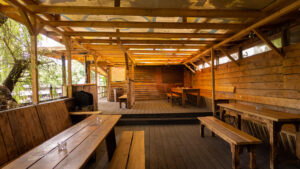 What makes CDV so special?
There are the obvious reasons, the intimacy of the dancefloor, one of the smallest in the world, the relaxed atmosphere that is so great for socializing and catching up with friends, the rich history it has. But as Sonja Moonear said recently, it is also a fantastic cultural incubator for our scene, allowing untold numbers of connections to be made between like-minded people, and forging stronger bonds between those who have already met. These kinds of institutions are very important for this culture and the music. I cannot imagine what my life would be like without the wealth of musical friendships and connections I have made through it over the years.

Last but not least: What does music/art mean to you? (Answer as short as possible)
You asked to answer this as short as possible, which is hard, haha, but I think a favorite quote by Viktor Shklovsky from his “Art as Technique” essay manages it succinctly. “Art exists that one may recover the sensation of life; it exists to make one feel things, to make the stone stony.” And music, for me, is a form of expression for all that which lies beyond the limits of language – which is why writing about music is so difficult and almost always falls flat. 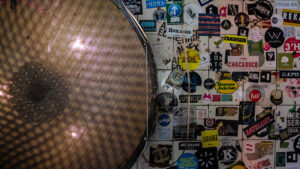 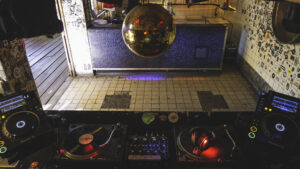 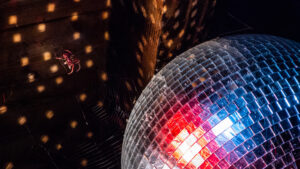 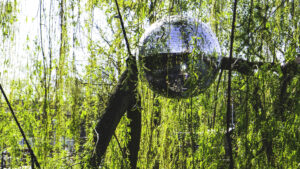 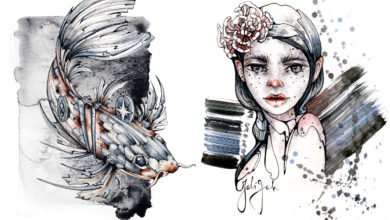